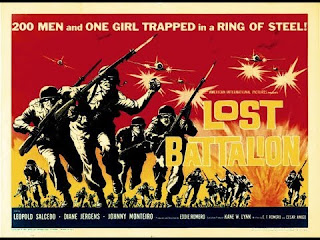 Storyline
In the Philippines during World War II, a girl is rescued from bandits by a guerrilla fighter.

Plot
In the Philippines during World War II, an American major tries to move a guerilla unit and group of American refugees to the coast, so they can be rescued by submarine, all the while trying to avoid capture by the occupying Japanese forces. Leopoldo Salcedo played the handsome Filipino guerilla leader who is in love with a stranded American girl Kathy (Diane Jergens). . 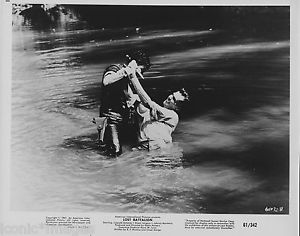 Lost Battalion (aka Escape to Paradise) is a 1960 black-and-white Filipino war film and love story produced and directed by Eddie Romero, co-produced by Kane W. Lynn[3]. Set during World War II, it stars Leopoldo Salcedo, Johnny Monteiro and Diane Jergens. It was later released in the US by American International Pictures as Lost Batallion, on a double feature with Guns of the Black Witch in 1962. The film's ad line read "200 Men and One Girl Trapped in a Ring of Steel!" 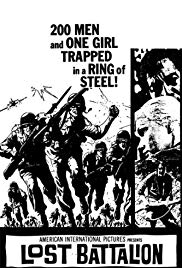 Source: imdb.com, wikipedia.org
Note: * All videos are from random sources, the quality is variable * Copyright of the films, movies are belong to the real owner (Producer or Broadcast channel) *The files will or can be removed if the copyright owner complain to this site. *This site never buy any films and movies from any filming company. *Thank you for always visiting this site and for your support to us
Labels: 1960, Action, Drama, Romance