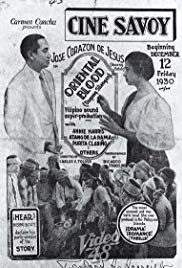 
Please share and save your movie on Facebook!
Movie information
José Corazón de Jesús (November 22, 1896 – May 26, 1932), also known by his pen name Huseng Batute, was a Filipino poet who used Tagalog poetry to express the Filipinos' desire for independence during the American occupation of the Philippines, a period that lasted from 1901 to 1946. He is best known for being the lyricist of the Filipino song Bayan Ko.

De Jesús, who was already famous around the Philippines as Huseng Batute, was asked in 1930 to act in the movie Oriental Blood, which starred Atang dela Rama and Carmen Rosales, the most famous actresses of the day, and his own son, José Corazón de Jesús, Jr., who would later gain some fame as a silent movie actor. De Jesús contracted an ulcer during the filming of Oriental Blood and died of complications on May 26, 1932. (Source: Wikipedia)

Source: imdb.com, wikipedia.org
Note: * All videos are from random sources, the quality is variable * Copyright of the films, movies are belong to the real owner (Producer or Broadcast channel) *The files will or can be removed if the copyright owner complain to this site. *This site never buy any films and movies from any filming company. *Thank you for always visiting this site and for your support to us
Labels: 1930, Drama, Romance